Science & Environment
About Town
The community of Unalaska is a busy place to live. Our community calendar is full of events and activities. About Town is your source for coverage of community events and sports. KUCB staff writes many of the stories, but we also accept contributions from community members for this section of our website. If you'd like to submit a story to About Town, send it to info@kucb.org.

Remnant of Typhoon Merbok brings high winds to the western Aleutians, and high temperatures to Unalaska.

Remnant of Typhoon Merbok has crossed into the Bering Sea bringing high winds to the western Aleutians, and high temperatures to Unalaska. KUCB's Vic Fisher talked to Kaitlyn O'Brien, a meteorologist with the National Weather Service, about the storm.

This interview originally aired on KUCB on Sept. 16, 2022. It has been edited for length and clarity.

Kaitlyn O’Brien: I'm really excited about this opportunity and happy to help answer these important questions.

KUCB: We're having this kind of crazy freakishly warm weather. I believe yesterday we broke our record. Does it have something to do with the former typhoon Merbok?

O’Brien: You know, the real situation here is that the track of this storm, where it has moved across the Bering Sea, has affected the weather in Unalaska. It's really the position of this area of low pressure relative to Unalaska Island that has brought those gusty southwesterly winds. Typically, with southwesterly flow in Unalaska, we'll see a warming and drying trend. This is due mostly to what we call down-sloping. The terrain definitely helps to accentuate it and warm those temperatures and dry out the atmosphere around Unalaska Island… I did see the temperature got into the low 70s. You know, if you were to go farther north, I think it would be a much different story up there.

O’Brien: Yes, that's right. The important thing to say about this storm is that it’s a hurricane-force low. We are we are seeing hurricane force winds -- that's generally anything 65 knots or higher. 74 miles per hour or greater. So yes, this this storm is packing a punch.

KUCB: Wow. It's just so far removed from us, because we just have these beautiful clear skies and warm weather. But yeah, our friends in the central and western Aleutians as well as the Pribilofs are probably under some pretty nasty weather.

O’Brien: They're definitely getting the brunt of the winds. I believe in Adak we did see some strong gusts. I believe there was a gust of up to 80 miles per hour recorded. So yes, we're definitely tracking that and continuing to see how the storm progresses.

KUCB: Why don't we have this type of warm air all the time? How is it that tropical air has arrived at this time of year versus other times of the year?

O’Brien: Yeah, that's a great question, Vic. You know, this is not an unusual time of the year for this to happen along the Aleutians specifically. Typically, we do see this occur and it coincides with the Pacific typhoon activity. The combination of a warm airmass and the direction of the winds that we have with this southwesterly flow, where that low center is positioned in the Bering, we tend to get that down-sloping flow, and that helps to warm the atmosphere. It’s not unusual for this time of year. It's just that this particular storm has intensified as it's entered the Bering Sea, and so it is a little bit stronger. One of one of our stronger areas of low pressure for the month of September that we've seen,

KUCB: An interesting thing to me is the difference between a tropical cyclone typhoon, and an extra-tropical storm. How do they differ in development and physical characteristics?

O’Brien: It’s important to understand that the atmosphere in the tropics, in the tropical region, is much more homogenous. It's all generally really warm air. This includes the higher levels vertically in the atmospheric profile as well as horizontally. But as we climb into the higher latitudes, we start to introduce colder air as you go up higher in the atmosphere. Again, not only vertically higher in the atmosphere, but also horizontally. And so really, the difference is that you can have an area of low pressure in the tropical region and that's what we would classify as a typhoon in the Pacific or a hurricane in the Atlantic. But once that storm exits the tropical region, it is now transforming to become an extra-tropical cyclone outside of the tropical region. When we see a storm transitioning in that way, we are looking at the temperature gradient. There's much more of a temperature gradient for the reasons I mentioned earlier, as you move into higher latitudes. The temperature changes over an area much more drastically. We don't have that homogenous air that we do see in the tropics. It is important to note, though, despite the differences in how these storms form, the impacts and the resultant weather can really be the same. We can see coastal storm surge with an extra-tropical area of low pressure, and we can see those really strong gusty winds, the same that we would with a typhoon or a hurricane.

KUCB: How do you predict the path of the storm? And what are the parameters you use for prediction?

O’Brien: I can tell you that our meteorological model agreement has been fantastic with this system. We have seen the models come into agreement, pretty much in lockstep with one another. We have a couple of different main models that we're looking at. And they all really, really locked on to the storm and the track that it's taking pretty early on. We saw this three days ago, even. And even before that, we started to see the signals that this was lining up.

Not only are we relying on computer models that we’re running in a sequence of hours, you know, every 12 hours, every six hours, but we're also relying on our verification. What's happening this morning, what happened last night and how does that compare to what the model was suggesting at that time. The verification so far has been quite impressive as well.

We've been seeing things pan out, right on track with our forecasts and what we were predicting. So that really gives us an extra layer of confidence. So we're, we're feeling really good about this forecast and it's great that the models have this concise agreement.

O’Brien: We don't always use that terminology. Sometimes it tends to get hyped, and it can sound really scary. So we don't always use that language to describe the event or describe the area of low pressure. But scientifically, yes, by definition, this storm has strengthened 24 millibars or greater over a 24 hour period. So purely by definition, yes, this would be a bomb cyclone. But you know, we don't necessarily describe it that way all the time.

KUCB: Currently, what is the lowest millibar reading you've had for this storm?

O’Brien: So as of this morning we were predicting to see 937 millibars. And so, again, it's going to depend on those on the ground observations and we don't have confirmation of that quite yet. But that was the latest analysis today.

KUCB: Oh, that's a very low low, isn't it? What is the lowest barometric pressure we've seen in the Bering? I know typhoon Nuri was a pretty deep low back in 2014.

O’Brien: Actually, it was pretty recently. It was a storm that we had in December of 2020. There was a new pressure record and that was 925 millibars. That specifically occurred on the last day of 2020, December 31. That beat the previously accepted record low recorded at 925 on October 25, of 1977. So I do want to clarify the exact pressure reading for December 31, 2020. Occurrence was 920 4.8 hours so I had just rounded it to 925. But it was two hundredths of a millibar lower than the 925 that occurred in October of 1977.

KUCB: Why does cold air create a more powerful storm?

KUCB: Thank you so much for coming on the air here in Unlaska. Do you have anything else to add?

O’Brien: Well, thank you, Vic. I really appreciate the opportunity. It was a pleasure chatting with you and helping to address some of these questions. I really enjoyed it. I would just add, as we're tracking this storm, just continue to pay attention to the forecast and check back frequently. We're constantly updating our forecasts and all of the information that we have, as we learn more and as we move forward in time. We'll be making updates so you can always find our forecast information online. Our web address is weather.gov/Anchorage. And that's specifically for our Anchorage forecast office where we are crafting the messages and putting the forecasts together.

KUCB: Fantastic. Well, Kaitlyn, thank you so much. Again, we really appreciate you answering these kinds of detailed questions about the remnants of Typhoon Merbok. 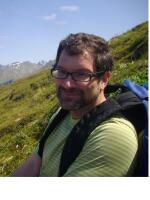 Vic Fisher
Vic launched our first ever live morning program, AM Unalaska, in 2012. He DJs from 7-10am with different musical themes every day of the week. He also shares his knowledge of meteorology and astronomy by providing listeners with information on the weather, tides, and moon phases.
See stories by Vic Fisher