Science & Environment
Local News
The KUCB Newsroom provides newscasts Monday through Thursday at noon and 5 PM on KUCB Radio. You can find many of our local news stories here.

A group of international researchers is out in the Bering Sea this summer exploring a world we humans don’t know much about—the deep ocean.

Scientists from 12 countries are conducting research on the AleutBio expedition, an initiative to map deep sea biodiversity in the eastern Bering Sea and the Aleutian Trench. They set out from Unalaska in late July to learn what’s living on the seafloor, miles below the ocean surface.

Dr. Angelika Brandt is with the Senckenberg Research Institute and Natural History Museum in Frankfurt, Germany, and she’s the chief scientist on the expedition.

“Fifty to eighty percent of all species on earth live in the ocean,” said Brandt. “And the deeper we go in the ocean, the less we know about the inhabitants…It’s not easy to identify species from an area that is completely unknown...There is no determination literature.”

This is the first time scientists are taking such a close look at what lives in those depths near the Aleutians. Some of the samples are gathered more than four miles down by dropping trawl nets from the deck of the research vessel. These giant nets scoop up samples of whatever’s sitting on the ocean floor. To get even deeper than that, researchers use a machine called a multi-corer. It punches out cores of sediment to see what’s living in the seabed. They also send down a camera to look at the larger animals.

The species they find varies between sample sites, but the team has been pulling up sponges and brittle stars, carnivorous worms and tiny crustaceans. Many of the creatures are too small to see with the naked eye.

Brandt said it takes teamwork to identify so many distinct species, and to use the specialized technology needed to do the job.

“Scientists have different roles and different expertise. Everybody works on one piece of the puzzle and we can put that together in the end to get a more comprehensive view of the biodiversity.”

Once the researchers get a complete picture of what they’ve found, they want to compare it to what lives in the nearby waters of the Arctic Ocean and Kuril-Kamchatka Trench, in the northwest Pacific Ocean. According to Brandt, these places likely have similar environmental conditions, and species might move from one region to another.

Why is that so important? Brandt said animals are already changing where they live in response to climate change, and researchers need a way to track these rapid shifts. And, she said, understanding life on our planet is the first step to protecting it.

“Without knowing species, you cannot conduct species conservation. We need to know what lives there.”

The AleutBio expedition will end in Vancouver on September 6.

To follow the researchers journey and learn about their findings, check out the AleutBio blog at https://aleutbio.sgn.one/en/. 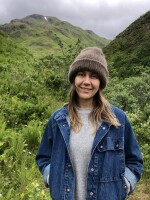