· The bag limit for Unalaska Bay fresh and saltwaters is 5 salmon per day of which only 2 may be sockeye.

· Anglers are reminded that Town Creek (Iliuliuk/Unalaska Lake drainage) is closed to fishing for sockeye year-round.

· The saltwaters of Summer Bay are open to snagging, however, the freshwaters from the outlet of Summer Bay Lake to the ocean are closed to all sportfishing.

· All freshwaters of Unalaska Island are closed to snagging year-round.

· The Southwest Alaska Sportfish regulation booklet has a complete list of sport fishing regulations for Unalaska Bay. It can be found in print in many locations or at: http://www.adfg.alaska.gov/index.cfm?adfg=fishregulations.sw_sportfish

·      Some reds are still being caught at Front Beach, but the pinks are starting to show up as well.

·      Reds are in at Summer Bay too, though it sounds like fishing has been fairly slow at times

·      Counts at the McLee’s weir are over 15,000 reds now and subsistence fishing has been good with lots of reports of good catches.

·      Dollies are being caught off many local beaches too: Front Beach and Summer Bay continue to be great places to fish.

·      A few reports of king salmon caught trolling in the bay have come in, though fishing seems to be hit and miss for king salmon.

·      As of January 1, 2020 all anglers fishing saltwaters from a boat in Alaska need to have a deep water release device on board and release any rockfish they aren’t keeping to 100 ft or the depth of capture, whatever is shallower. 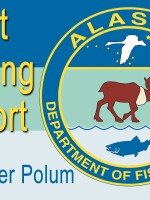 Tyler Polum
Tyler Polum is the Kodiak Area Management Biologist for the Sportfish Division of the Alaska Department of Fish and Game.
See stories by Tyler Polum